Blood samples showed that fractions of alpha-synuclein in neuronal and oligodendroglial exosomes were different enough to distinguish Parkinson's from MSA patients with 90% sensitivity and specificity, according to Gal Bitan, PhD, and Suman Dutta, PhD, both of the University of California Los Angeles, and colleagues.

Both Parkinson's disease (PD) and MSA are characterized by an abnormal deposition of alpha-synuclein aggregates in the brain. "It has long been known that the deposits are in different cell types," Bitan said. "In PD, Lewy bodies are deposited in neurons, whereas in MSA, glial cytoplasmic inclusions are found in oligodendrocytes."

Biomarker May Distinguish Parkinson's From MSA

ATLANTA — Levels of alpha-synuclein — a key synaptic protein found in brain-derived blood exosomes from patients with Parkinson's disease, dementia, or Lewy body disease — are highly accurate in distinguishing between Parkinson's disease and multiple system atrophy (MSA) and has potential as a sensitive biomarker of these diseases, new research suggests.

"We expect that this new test will offer an earlier diagnosis with a higher degree of certainty for patients with Parkinson's disease and MSA," senior author Gal Bitan, PhD, professor, Department of Neurology, the David Geffen School of Medicine, University of California, Los Angeles (UCLA), told Medscape Medical News.

"Today, the diagnosis relies primarily on the clinical exam, and even the best movement disorders specialists make quite a lot of mistakes," he explained.

Distinguishing Parkinson's disease from MSA, as well as from dementia with Lewy bodies, can be a diagnostic challenge, owing to the many overlapping symptoms of the neurodegenerative disorders. The difficulty can create lengthy delays in arriving at proper diagnoses and treatment.

Balance and movement improved in animal model of Parkinson’s disease

Researchers at UCLA have developed a molecular compound that improves balance and coordination in mice with early stage Parkinson’s disease. Further, the drug, called CLR01, reduced the amount of a toxic protein in the brain that is thought to be one of the prime culprits in the development of the disorder.

Parkinson’s disease is a nervous system disorder that affects movement. It’s estimated that as many as 1 million Americans live with Parkinson’s, and that roughly 60,000 are diagnosed with it each year. There is no cure. The disease is chronic and progressive, and over time can worsen from tremors in a person’s hands and slow movements, to impaired balance and coordination and, ultimately, overall rigidity of the body, including difficulty swallowing and speaking.

While the cause is not known, growing evidence points to the protein alpha-synuclein. The protein binds together in “clumps,” called aggregates, becoming toxic and killing brain neurons that produce dopamine, a neurotransmitter needed to send signals among neurons involved in controlling movements.

Earlier research by Gal Bitan, an associate professor of neurology at the David Geffen School of Medicine at UCLA, and colleagues led to the development of CLR01, which is known as a molecular tweezer — a complex compound capable of disrupting the formation of toxic protein clumps. Shaped like the letter “C,” CLR01 wraps around chains of lysine, a basic amino acid that is a constituent of most proteins. In the previous work in zebrafish, the scientists showed that the tweezer could decrease the clumping of alpha-synuclein and prevent its negative effects without detectable toxicity or side effects to normal, functioning cells in the brain.

Targeting HIV in Semen to Shut Down AIDS 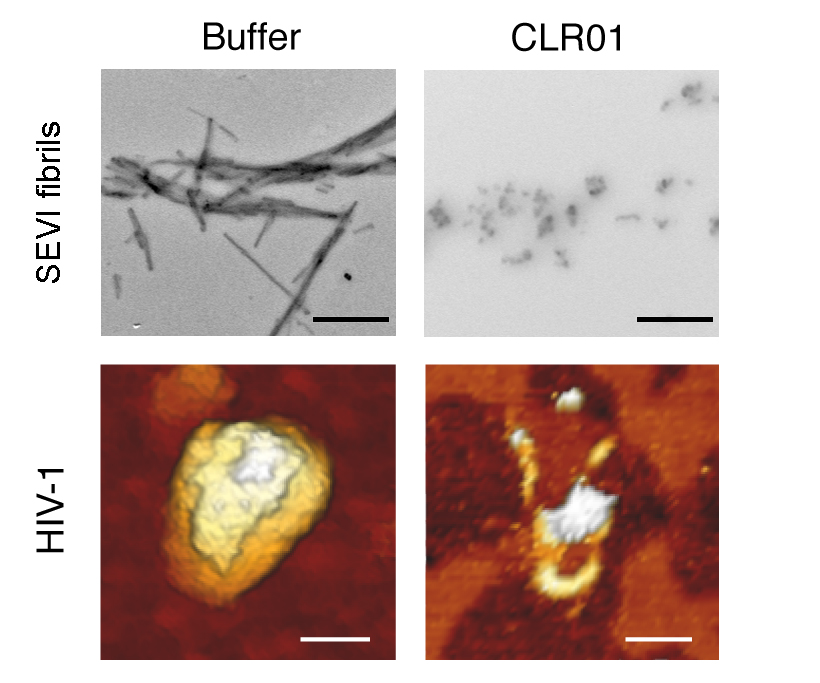 Modified from the original press release by University of Pennsylvania

A paper, published in the journal eLife describes a small molecule that also disrupts amyloids in semen that promote HIV infection. This molecule, called CLR01, also attacks the virus itself.

Tweezers-shaped CLR01 can both disrupt fibril formation and disassemble fibrils that have already formed. CLR01 prevents HIV particles from interacting with fibrils by disrupting the membranes that surround the virus particles and can displace the virus particles that have already bound to the fibrils. In the presence of CLR01, human cells exposed to semen that contained HIV were at least 100-fold less likely to become infected with the virus.